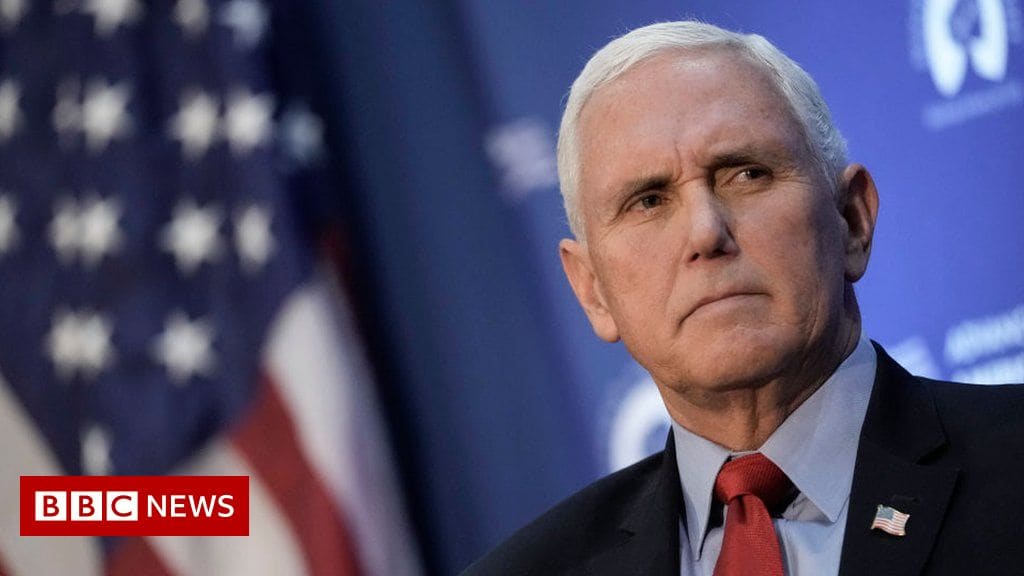 Former Vice President Mike Pence told Breitbart News exclusively that he is now certain thanks to pro-life activists’ work for the past nearly half century that Roe v. Wade will eventually be overturned, whether it be in a forthcoming ruling from the U.S. Supreme Court on a Mississippi abortion law or a future case down the road.

Pence also said he is sure former President Donald Trump would agree with him when he credits the pro-life fighters across America for the landmark change in U.S. abortion policy that seems to be on the horizon.

Pence, who made the comments in an exclusive interview on Breitbart News Saturday on SiriusXM 125 the Patriot Channel, was speaking in a recorded interview immediately following oral arguments before the U.S. Supreme Court in the Mississippi abortion law case earlier this week on Wednesday.

In the interview which aired on Saturday morning, Pence argued that this moment is possible only because President Trump appointed three pro-life Justices in Brett Kavanaugh, Amy Coney Barrett, and Neil Gorsuch to the U.S. Supreme Court during his presidency—and that was only possible because of nearly half a century of work of pro-life activists like in the Breitbart News audience working to elect pro-life lawmakers everywhere in America.

“I couldn’t be more proud to have served alongside the most pro-life president in American history,” Pence said. “I mean, President Donald Trump kept his word to the American people—and to appoint strict constructionist strong conservatives not just at the Supreme Court of the United States but nearly 300 federal judges confirmed across the country that, as I said at the National Press Club I don’t know if we will overturn Roe v. Wade in this case, I don’t know if it will happen now. But I know it will happen.

Not just because of the renewed conservative majority on the Supreme Court, but because of this extraordinary generation of conservatives that President Trump appointed to our courts all across the country. But I think the President would be quick as I am to say that where the real credit is due is among your listeners who for almost a half a century have never given up on the cause of life, have worked, have prayed, have given, have advocated, have supported pro-life candidates from our ticket to the Congress to state houses to city halls all across America.

I know the left thought that the pro-life movement would run out of steam, but as you and I both know it is stronger today than it’s ever been before. In fact, people in your generation are rightly called the pro-life generation because younger Americans grow more and more pro-life every day. In a very real sense, whether it be students for life around the country or all of the youth pro-life movements, it’s young people, young women and men in America that are driving us to this moment.

So I give great credit to President Trump and in our administration’s effort to thoughtfully consider judicial appointments and to keep our word to the American people to appoint conservatives, but it was the strength of 74 million Americans all across this country who stood with us in in 2020, who stood for life in all the decades before that. If our hope and our prayers are fulfilled and Roe versus Wade is overturned, the credit will go to the American people who never gave up on life and by their efforts restored the sanctity of life to the center of American law.”

Pence’s interview came right after the conclusion of oral arguments before the high court in Dobbs v. Jackson Women’s Health Organization, the case which will determine whether Mississippi’s law can stand. The Supreme Court may actually overturn Roe v. Wade, the 1973 case that set the tone for abortion for nearly 50 years, as part of its ruling on this case.

“I have to tell you, I’m very encouraged,” Pence said when asked to react to the oral arguments. “I thought the solicitor of Mississippi and his focus on the people’s ability to decide the issue of abortion at the state level was very well presented. In my remarks to the National Press Club the day before oral arguments that that was essentially the case that we made.

We know that the the left will will continue to make the argument against overturning Roe v. Wade, they’ll continue to paint a dark picture of America but more than 60 million unborn children have have lost their lives since Roe v. Wade was issued by the Supreme Court in 1973. Nearly 50 years on and the time has come to return this great moral question to the states and to the people. To hear the solicitor of Mississippi, Mr. Stewart, make that case very eloquently before the Supreme Court was an a great encouragement to me and my hope and my prayer, literally, is that it will persuade our new conservative majority on the Supreme Court to overturn Roe v. Wade and give America a new beginning for life.”

Asked, too, what he thinks of where things stand after hearing comments and questions from the various Supreme Court Justices during the oral arguments, Pence said he is hopeful.

“I think we have a great opportunity for a fresh start on life in America,” Pence said. “I thought that was evident today. Of course, three of those justices I’m proud to say were appointed by President Donald Trump and confirmed during our administration. I had the privilege of interviewing all the finalists for the Supreme Court all three rounds.

The President asked me to sit down to spend personal time. I can tell you that not only are appointees but Justice Clarence Thomas, who has been a stalwart for life and for overturning Roe v. Wade throughout his long and storied career on the Court, Justice Alito and I would also say that I would continue to hold out hope that the Chief Justice Roberts would see his way clear to the wisdom of overturning Roe versus Wade.

There’s lots of legal theories about what could happen here, but the legal scholars that I respect the most hold the view that when you look at Roe versus Wade, you look at its progeny and in the Casey case the viability standard that exists today, I think all point to the the best, the cleanest, the strongest decision the Supreme Court can make in this moment is simply to overturn Roe v. Wade, reject that framework, and allow states and the people to once again have the power to resolve this question.

Now, that doesn’t mean the debate over abortion will end by any means, but it will then move to the states and move to the people. I relish the opportunity of taking the case for life to one state legislature after another all across America. I’m very encouraged at the opportunity that we have in this case, and we’ll just continue to hope to be a voice but also to pray for a new beginning for life.”

Pence had delivered an address at the National Press Club in Washington, DC, the day before oral arguments on the matter.

As Breitbart News reported ahead of the speech, Pence laid out just how devastating Roe v. Wade has been for the world and just how many unborn babies were killed as a result of the decision. Asked about those speech comments, Pence told Breitbart News that the vast majority of abortion clinics are in minority areas and that tens of millions of American lives have been taken by abortion.

“It grieves the heart of every American who cherishes the right to life to think that more than 60 million innocent, defenseless unborn babies were aborted since Roe v. Wade was issued by the Court in 1973,” Pence said. “But we do well to remember the incalculable promise of every one of those lives. It’s a number essentially equal to 20 percent of the American population today that is not with us. In a very real sense what Roe vs. Wade did was it relegated unborn children to a second class pass with no legal protections completely outside the scope of the law.

Also, as I reflected at the at the Press Club yesterday, America’s largest abortion provider Planned Parenthood of America—as you know, I authored the first legislation to defund Planned Parenthood back in 2007—but the largest abortion provider in America was founded by a woman named Margaret Sanger who was an open advocate of eugenics and she advanced the cause of abortion for specifically racist intentions. Planned Parenthood today has the majority of its clinics in minority areas. Even though blacks and Hispanics represent only a third of our population, they represent two thirds of the abortions in America so whether it’s the impact specifically on minorities over the scope of history, whether it be the loss of so many tens of millions of lives, or whether it be the loss of the incalculable promise of each and every one of those lives,

I do believe as I said at the National Press Club that it has been in every real sense an affront to humanity and it’s time to put Roe versus Wade on the ash heap of history where it belongs. We can trust the American people to resolve this issue and to have these debates and I know that the left not only today but on every day between now and when the Supreme Court makes their decision in the Dobbs case that that we’re going to continue to hear the the scare tactics of the left.

But at the end of the day this is about trusting the American people and recognizing that it was through the legislative process at the state levels that we ended abortion in the 19th century and early 20th century and I trust the American people with the cause of life. I’m hopeful and I’ll say optimistic that this Supreme Court, this renewed conservative majority on the Supreme Court of the United States, appointed by a Republican president and the most pro-life administration in history will give us that new beginning for life.” Original Content