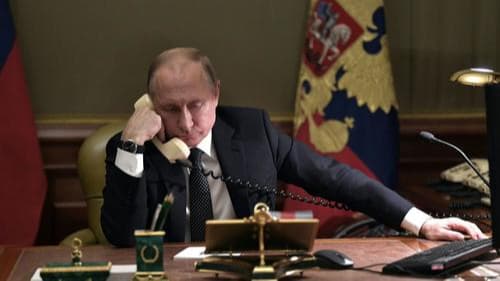 CNN and others are reporting just a day ahead of the much anticipated video call between Russian President Vladimir Putin and US President Joe Biden that the White House is mulling "nuclear option" level actions against Moscow should it launch a military offensive against Ukraine - which US intelligence has lately said could be imminent based on assessing that some 175,000 troops have been mustered in the Crimea and regions near Ukraine's eastern border.

This includes discussion of the possibility of disconnecting Russia from the SWIFT international payment system, seen as the most drastic potential measure which further includes fresh sanctions on Putin's inner circle and on Russian energy producers.

The Kremlin has of course vehemently rejected the Ukraine threat accusations, saying it's free to move its own troops wherever it sees fit within the Russian Federation's sovereign territory and borders.

But the White House is now threatening the following, according to CNN on Monday

And in particular, the "nuclear option" - which is now grabbing headlines...

On Russia's side, it has the "energy option" vis-a-vis Europe - something that the US has long warned the EU about, especially when it comes to the controversial Nord Stream 2 pipeline coming online. "The fear is Russia then tries to retaliate by holding back production," a top US official told CNN.

"We have put together a pretty damn aggressive package," an unnamed administration official additionally said to CNN, adding further that if Russia  invades Ukraine "the US and Europe together will impose the worst economic sanctions that have ever been imposed on a country, outside of Iran and North Korea," according to the report.

It should be noted that with such an "option" in play, if things actually escalated to the historically unprecedented level of Russia's being blocked from SWIFT - such a scenario would mark a huge future day for cryptos, given cryptos have been suggested as the first space Putin would likely migrate to amid total isolation for the West-based payment system used by banks around the world. Original Content